Warning: call_user_func_array() expects parameter 1 to be a valid callback, function 'create_post_type_html5' not found or invalid function name in /var/www/grademiners.co/wp-includes/class-wp-hook.php on line 303
 The Falling Man and the Catastrophe September 11: Photo Essay 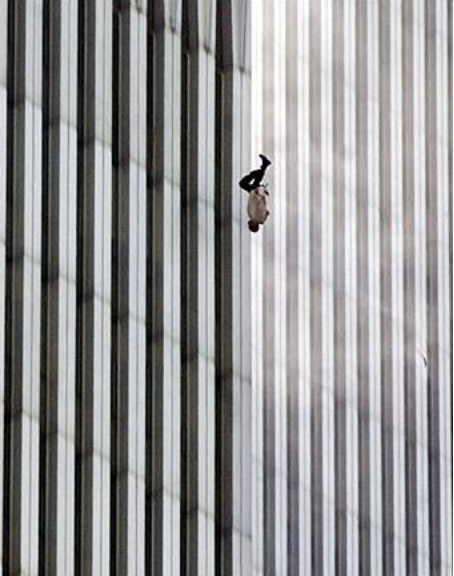 September 11 is a tragic day for the United States. It was on this day that four terrorist acts occurred simultaneously. The tragedy once again showed the world that human life could suddenly be broken due to someone’s malicious intent. On that day, the terrorists seized four airliners and drove them to the towers of the World Trade Center in New York, and about three thousand innocent people were killed in a few hours.

As a result of the collision, both towers caught fire. Panicking people jumped from the burning windows at a mad height to meet their death. The Falling Man is a photo story made by photographer Richard Drew. It is estimated that on that day at least 200 people were thrown out or forced to jump out of the burning towers, and the names of many of many of them are unknown since the authorities failed to identify all the dead. From 50 to 200 people jumped from the buildings in conformity with the official statistics. Legally, they are all murdered, and even if they jumped by their own will, they have not committed suicide.

We can see a man in this photo. Twin towers, covered with smoke and flame tongues, will remain the most durable images of terrorist attacks, but the image of the falling man, his last moments of life, humanized the loss of the blackest day of New York. These cadres have become widely known. Video footage of the figure flying down against the backdrop of a 1300-foot-high wall of steel and glass flew around the world. The photograph captures a person, whose identity could not be established, falling headfirst. 54-year-old photographer Richard Drew aimed his camera lens on the north tower and began to shoot jumping off. “You could hear them falling,” he recalls. “There was a strong clap, resembling the sound of a sack with cement falling on the ground.” He made 12 shots that day. Amid them was a falling man, seeming calm, flying to his inevitable death.

When you view the picture, it seems that the person falls almost straight in the string, strictly down, but in other pictures of the fall of this person, one can see that his body literally hangs in the air. The photography project was repeatedly published in media around the world.  The photographer who took the picture noted that he had to face criticism from readers who found the photograph “shocking.” Speaking about the cultural and social significance of the “Falling Man,” the theologian Mark Thomas noted that this photo “is one of the most vivid illustrations of human despair, which has no analogs in terms of the power of emotional impact in contemporary art. The whole essence of it is crystallized in only one picture. The photo caused a broad protest as if looking at her was equivalent to invading the last moment of personal agony. After September 12, it was almost not shown, but there was a person who could not forget about it and spent years trying to figure out who the man was.

Now there are some assumptions about his personality. Presumably, it was the 43-year-old Jonathan Briley, who worked in a restaurant at the top of the northern tower. Throughout all these years, his family thought that Jonathan died inside the building. However, there are only assumptions. The plane hit between the 93rd and 99th floors, killing hundreds of people, and the flames of the aircraft fueled the temperature to 1000 degrees Celsius. The pillar of the flame was so powerful that when the fire rushed down the elevator shafts, people burned down even in the foyer of the building. But about a thousand people trapped between the 100th and 107th floors were least fortunate. Elevators stopped, the stairs were blocked by debris, fire, and smoke, and there was no escape route. When the air became impossible to breathe, desperate staff and guests of the restaurant began to break windows. Probably, it was in these last moments that the hero of the photograph made his terrible, and at the same time, the last decision.

It is not so important to find out who the falling man was; the importance lies in the fact that his death tells us all. And it proves that every human life is valuable and this should not happen again. This event will forever remain a terrible memory not only for people whose loved ones have died a terrible death but for all of America and the world community as a whole. Photo The Falling Man is a symbol of life and death simultaneously. It tells us about the possibilities to make a decision, but this is just the terrible event when the decision will be the last.